Why is ARINC 717 Different from Most Avionics Communication Specifications? 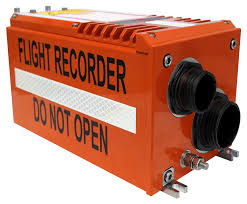 You’ve probably heard of the black box found on every commercial airplane.

The “black box” actually refers to two orange boxes, the Cockpit Voice Recorder (CVR) and the Flight Data Recorder (FDR). These contain the information necessary to find out why a plane crashed.

It turns out that the information we want the FDR to record is not available in one place on the aircraft; it needs to be collected from multiple buses that work independently during normal flight operation.

That’s why there’s another box on the plane called the Data Acquisition Unit (DAU) whose job it is to listen to multiple buses – maybe ARINC-429, AFDX, CANBus or other buses – and gather the information, then send it using ARINC-717 to the FDR whose job it is to 1) record it, and 2) survive a crash.

Since the whole point of the FDR is to contain the most recent data of the parameters deemed by the aircraft designers to be important when reconstructing what went wrong, the design of ARINC 717 is different from other buses.

For one thing, there are no gaps in the data. If you watch a scope of an ARINC 717 bus, you will see a continuous stream of bits. This makes sense, since any gap represents time lost from recording critical flight data. An ARINC 429 receiver may only need altitude every 50 milliseconds, in which case, between updates, we don’t mind some dead time on the bus. However, the FDR really needs as much data as possible in the critical last seconds of flight. Since we don’t know when those seconds will occur – hopefully never – we want to maximize the data being recorded, hence no gaps.

No gaps doesn’t mean no format. ARINC 717 divides data into subframes and frames. A subframe is one second long. A frame is comprised of 4 subframes. Depending on the airplane, a subframe might contain anywhere from 64 12-bit words, up to 2048 12-bit words. Every frame contains exactly the same information. That is altitude, latitude, longitude, engine temperature, etc., will be placed in exactly the same location within every frame.

The four subframes within each frame are not identical. Some information may be found in every subframe, while other information may appear only once per frame. This lets the aircraft architect give higher priority to some types of data – say fuel remaining – over less critical information like the time.

There is a downside to the continuous data stream. If the DAU is turned on before the FDR, the FDR will power up in middle of a stream of data. So how does the FDR know when the next frame begins? Without knowing where the beginning of the frame is, the data is meaningless.

The designers built in a synchronization mechanism to handle this issue. The first word of each subframe has a fixed value. The FDR looks for the word associated with frame one. When it finds it, it waits one second then checks if the word being received has the correct value for the first word of frame two. This continues until it finds all four sync words. Then it knows that one second later will be the beginning of a new frame. This mechanism has the result of the FDR not recording the first four to eight seconds of data it receives on power up. But that’s OK, since very few crashes occur within eight seconds of powering up the aircraft.