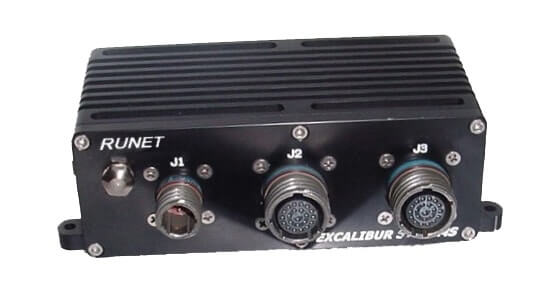 The ES-1553RUNET/Px is an intelligent, rugged single channel, MIL-STD-1553 adapter. Its small size and ability to interface through Ethernet interfaces make it a complete solution for developing, testing and performing system simulation of the MIL-STD-1553 bus, both in the lab and in rugged environments.

The ES-1553RUNET/Px shares its API with the entire Px family so that applications currently running on PCI, PCIe, ExCARD or PCMCIA boards will run without change on this device.

Multiple units can operate on the same network, by programming each one with a unique IP address, and can be accessed from any computer on the network.

Each channel of the ES-1553RUNET/Px operates simultaneously as a Bus Controller and/or multiple (up to 32) Remote Terminals, or as a Triggerable Bus Monitor. The card supports error injection and detection. The adapter’s small size and compatibility with any computer using Ethernet, makes it the perfect solution for performing system simulation of the MIL-STD-1553 bus, in the lab and in rugged environments.

Each channel of the ES-1553RUNET/PxS operates either as a Bus Controller, Remote Terminal, or Bus Monitor.

The ES-1553RUNET/Px and ES-1553RUNET/PxS adapters are supplied with C drivers, including source code and may be used with Exalt, Excalibur’s Analysis and Laboratory Tools, a Windows monitoring application.